Home » Uncategorized » A tale of two colleges, a suitcase and a mission 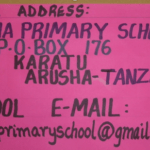 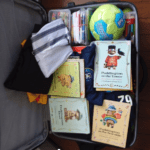 The Mission: To transport 20 kgs of college supplies both re-purposed and new from Australia to Africa, in the suitcase.

The Suitcase:  Bought from the Salvation Army shop for $6

The story starts when my husband and I Angela and Geoff Towle, (grandparents of Darcy and Leon Towle), decided to go on safari in Africa. The word safari is an African word that means journey, and what a journey we had. We decided to visit Tanzania, which is a country in East Africa. It has a population of nearly 60 million people, and 44% of the population is under 15 years old. So there are many many children to educate. We discovered an organisation called “Pack for a Purpose” which asks people that if they have spare space in their bags or extra baggage allowance to bring useful supplies for colleges. They said, “Please no lollies, as there are no toothbrushes, toothpaste nor indeed dentists, and please no balloons as eventually the animals eat the rubber and get sick”.

So where to turn? We were helped by Chontelle Balbi and the CCSC Independent Sports School in Kariong. Just before we left we were able to fill the suitcase with pencils, pens, sharpeners, crayons, felt pens, exercise books, footballs, tennis balls and football uniforms. More on those later! Our local book shop also donated new books for the children. So we were loaded and ready to go!

The area of Northern Tanzania that we were visiting is very high. There is a large mountain called Kilimanjaro, snow is on the top all year. Tloma School is also at a high altitude and the temperature, can be colder than in Sydney in the morning in winter. The parents in the local town are mostly farmers and herdsmen. 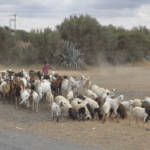 There is little piped water to houses and not a great deal of electricity. It is compulsory to go to college but you must wear a uniform and some parents can’t afford that. Some boys are kept home to herd sheep and goats all day. This can be dangerous as there are lions and hyenas in the area. The land is fertile, the people work on coffee plantations and grow bananas, maize, vegetables. Many local people work as guides, drivers and in the hotels in the tourist trade, the second largest income earner for the nation. But many people are poor.

Tloma Primary School has 760 pupils from aged 5 to 13 years old. There are 14 teachers including a non-teaching headmaster. This gives a class size of about 60 children. There is a national exam in year 7 for entry to secondary college which is fee paying. If a pupil does not pass the exam there is no second chance to go to secondary college! Since 2007 the college has made miraculous strides in the exam results, and the percentage of children passing has nearly doubled!

It is difficult for the children to get to college. The catchment area is 5 kilometres and there is no public transport so the children walk. In March and April there are the long rains and in November the short rains. The roads flood. The college day is long, starting at 7am and finishing at 4pm. On arrival the children have to tidy the college grounds. They are also inspected for personal hygiene. Local village people help to provide lunch and some children bring food from home. The local guest house in which we stayed provides all the clean drinking water at the college and makes the desks in their carpenters’ work shop

When we arrived at the college we were mobbed as soon as we got out of the car. We were visiting Year 6. The pupils were all about 12 years old and some of them were very tall, especially the girls. All of them wanted to hold our hands and to touch us. They were not at all shy. They wanted to touch our different coloured skin. We couldn’t even get our cameras out to take photos. When we got to the classroom we managed to take some pictures. 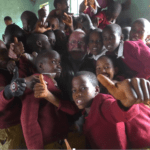 The children were very well behaved for the teacher. They sang us a song and then we had to introduce ourselves.The teacher I think had prepared the children with some knowledge of Australia as the children asked us some very sensible questions such as what is the population of Australia and of course asked about our unique wildlife. Many of the children told us their goals in life. The boys wanted to be pilots. As you can see the class room has very little in the way of furniture and no power. We went outside and the children danced. It is customary in Tanzania to dance in welcome. They were very happy to receive it and the supplies would benefit all the children.

The class teacher’s salary is approximately US $200 per month to teach his class of 60+ children. Teachers are regarded with great respect in Tanzania and teaching is considered to be a very good job.

Now as to those football uniforms that were in our suitcase, they will probably be given as prizes for effort and good work! We enjoyed our morning at Tloma primary college with the children and their teachers. We know that the supplies will be put to good use. As for the now empty suitcase, we gave it to our guide. His own grown-up son who has been through the Tanzanian college system and has worked very, very hard, is off to India to study medicine. Our guide said “My son will look very fine at the airport with such a suitcase”

Puts it all in perspective doesn’t it?