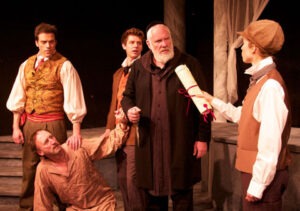 I have always enjoyed drama in its various forms. I’ve written, produced, directed and performed in many productions. Drama is an opportunity to be transported into another existence, to be someone different (and to get away with it). When working with children, it is an opportunity to build self-confidence through public speaking whilst exploring characters who are likely to be very different to the ‘actor’ playing the part. I’ve always seen drama as a pedagogical tool, where, for example, I could cast an introverted student into a particular role in an attempt to bring them more out of themselves, out of their comfort zone. By the same token, giving a quiet reflective part to an extrovert may help them to discover the virtues of that inwardness.

Some years ago I produced and directed a performance of Shakespeare’s The Merchant of Venice with a year eight class. In the class was a boy with a sharp intellect who would have made an excellent Shylock; those who know the play will understand that Shylock is quite an unlikeable, devious character. When I didn’t cast this particular fellow into the role, he was livid with me for days afterwards. I cast him as Lorenzo, a young man who in the story falls in love. He did eventually get over it and as a result discovered a whole new side to his being; at least that’s what I perceived happened.

Stage 2 is presently working on a play – The First Fleet. Todd and I are scripting it together with the students. We began the process by setting the basic scenes and characters, we then told the students the basic outline of the story, and from there we‘ve been working with their ideas, creatively moulding what hopefully will be a good experience for them and the audience when it’s finally performed in the second last week of the term.

There is much to be told and learnt about the colonisation of this country. Not everything can or will come through in this play, but in its creation we have an opportunity to study, in simple terms, much of what happened during and post colonisation. So many Australians have died in wars outside of our country and we hold services each year in memory of their contributions and loss, but also very many died in wars within. Many believe that one of the reasons we are the lucky country is that we’ve never had a war here. Nothing could be further from the truth, so many died during colonisation. This is quite a delicate issue to deal with, particularly with young children, obviously we are very sensitive when discussing the topic with our students; our approach is slow and careful.

It is important that we examine the past in an effort to do better in the future, as a nation, and as individuals. At the end of our play comes a kind of reconciliation scene; looking positively towards the future. Please feel free to come along to our performance on Wednesday 3 December, time yet to be decided, once set it will be announced in our weekly information email.

Apart from the wonderful language of William Shakespeare, the content also has gems of wisdom. Let me leave you with a piece out of his Merchant Of Venice.

The quality of mercy is not strained.
It droppeth as the gentle rain from heaven
Upon the place beneath. It is twice blessed:
It blesseth him that gives and him that takes.
‘Tis mightiest in the mightiest. It becomes
The thronèd monarch better than his crown.
His scepter shows the force of temporal power,
The attribute to awe and majesty
Wherein doth sit the dread and fear of kings,
But mercy is above this sceptered sway.
It is enthronèd in the hearts of kings.
It is an attribute to God himself.